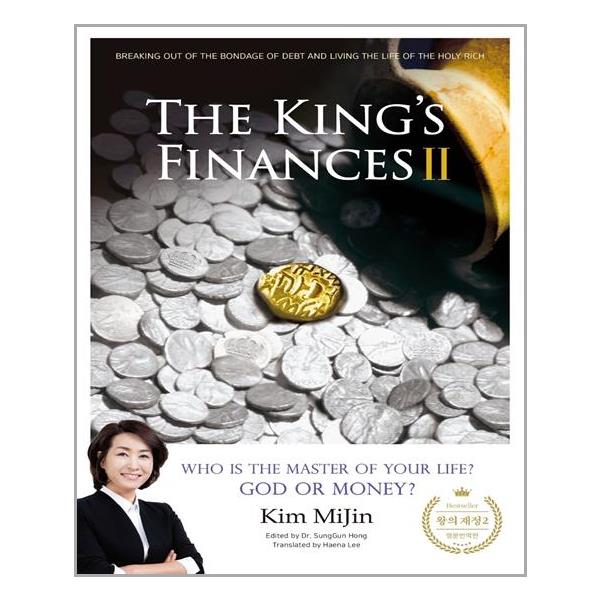 Chapter 2 Do You Truly Want to Become Rich (A Holy Rich Person)?
Reborn a True Rich Ma
From Debtor to Holy Rich
God’s Mathematical Equation
Breakthroughs Come from Training
Becoming a Kitchen Aide
From Owner to Employee
Rainbow
Be in the Place of and Within the Methods of God’s Provision
The Courage to Stand on the Edge of a Cliff

Chapter 3 A Life of Faith
God Shows the Next Step to Those Who Obey
How a Luxury Watch Became a Luxury Car
What People Whom God Uses Have in Common
The Turning Point in My Ministry
Do Not Limit the Power of God
Carried in on the Back of Another, Walked out on One’s Own Feet
The God Who Brought Me Back to Life

A Brief Introduction to The King’s Finances Implementation Workbook

Chapter 2 Abraham’s Seed, Solomon the Worldly Rich, David the Godly Rich
Transplant Abraham’s Spiritual DNA
Two Strands of DNA in Abraham’s Life (A Life of the Altar and the Tent)
Two Strands of Abraham’s Spiritual DNA (Faith and Faithfulness)
Why Did I Fail?
Single Determination
The Worldly Rich Solomon’s Attitude Toward Riches
The Holy Rich David’s Attitude Toward Riches
My Life as a Holy Rich Person Finally Begins

Chapter 4 Is My Arm Too Short?
Remove the Foreign Rabble Within Yourselves
Now Is Not the Time to Ask for Meat
You Will Eat Meat when He Has Enlarged Your Territory
The Mighty Power of the Execution Workbook
Things Just Seem to Work Out for You

Chapter 5 The Heavenly Bank = Good Soil
The Poor
Tithes
3.3 Percent - The Blessing of “the Other Tithes”
The Two Blessings of Tithes


PART Ⅲ Look After the Poor
Chapter 1 The Miracle of the Five Loaves and Two Fishes Continues to This Day
Give Them Something to Eat
The Lord Does Not Take What You Do Not Have
Must I Close Shop on Sundays?
King’s Finances Training for the Whole Family
About This Time Tomorrow, I Will Turn Around and See You
Taking Ownership of God’s Promise in Faith
Treating My Leprous Spirit by Restoring the Love I First Had
The Characteristics of the Wilderness

Chapter 3 Those Under Mammon’s Captivity
Judas Iscariot
Achan
Gehazi: The Servant of Elisha
Ananias and Sapphira
Give Me Back My Donations
The Worldly Rich
The Life of the Worldly Rich Who Have Been Captured by Mammon

Chapter 2 The Kingdom of God vs. the Kingdom of the World
There is No Middle Ground for the Believer
Pass on the Inheritance of Holy Riches to Your Children
Awaken the Next and Not a Different Generation
The Obedience of Sacrificing Isaac
The Heroes of the Hero Camp
The Light of the Word Looses Bound Children
I Have Been Transformed by the King’s Finances School for Kids
Children Who Come as Unbelievers and Return as Devotees
Heroes Come to Camp Prepared
The Name That Was Not Erased for Three Days

Kim MiJin is a fourth-generation Christian born into a family of faith. Though she achieved great success as an entrepreneur starting in her college years, she gave up on life under the burden of being billions of won in debt. That was when she came across lectures on biblical finances and paid off all her debt by living according to the Word as if her life depended on it. What she learned as she repented is that “God is our only master, just as He is our sole Provider.” Her books and lectures have brought countless unbelievers and disheartened people back to the Lord and facilitated God’s grace and miracles; people who were slaves to money finally cleared their debts and began sharing God’s blessings with their poor neighbors and started living life as disciples of Jesus. This book also contains the vivid testimonies of those who have become disciples through the testimonies and lectures of Kim MiJin as well as the training they received through the King’s Finances School after The King’s Finances I was published. Kim MiJin is currently serving as President of NCMN (Nations-Changer Movement & Network) and the main lecturer at the King’s Finances School. She is the author of the books, The King’s Finances I, The King’s Finances Workbook, The King’s Finances I (English translation), and The King’s Voice (co-authored by Hong SungGun), published by Kyujang.

Rev. Hong SungGun has dedicated his life to the Great Commission of Jesus Christ to make disciples of all nations and served to awaken college campuses and the young generation. He founded NCMN in 2012 and is currently serving as its International President. He received his undergraduate degree from Sogang University, a graduate degree from the Presbyterian University and Theological Seminary, and obtained his Ph.D. from William Carey International University. Rev. Hong SungGun’s published works include, The Book, Shema Bible School (OT/NT), Christian Civilization Reform Movement, The King’s Voice (co-authored by Kim MiJin), The Word: Cover to Cover in 100 Days (Kyujang), The Man God Seeks, and The Man Who Serves and Rules (YWAM). Homepage www.ncmn.kr

Mammon’s powerful influence plants a false understanding of money within people’s mind. Mammon makes people value money in and of itself, causing them to chase after money.

However, once we clearly understand what money is, we live a life not with love for it, but a love for God; we learn to love God in all His greatness and learn how to handle money.

It is my hope that the readers of this book begin a journey of reflection on who is happy, who is rich, who is unhappy, and who is poor. I hope that through this journey, readers will gain an understanding of the real function and value of money.